Updated: Wednesday, March 11 2015, 09:21 AM CDT
Education groups visited the statehouse on Tuesday to discuss the state’s funding of public schools.
They came from all over the state, and voiced concerns to lawmakers. The concerns included the state’s failure to meet funding promises, and growing inequality of funding between districts.
But lawmakers say there is at least one point of contention.
“I maintain that even though we’re under these mandates, there are things you have an advantage in some of the flat grant districts that other districts don’t have,” said Rep. Al Riley (D-Olympia Fields).
A House committee is set to discuss a plan to change the state’s funding formula for schools on Wednesday.Read More at: http://www.foxillinois.com/news/features/top-stories/stories/education-groups-visit-statehouse-2779.shtml

South Holland, IL-(ENEWSPF)  South Suburban College students traveled to Springfield recently to participate in Student Advocacy Day and Legislative Awareness Day. Students from the college’s Student Life & Leadership Department, Student Government, and Division of Adult Education worked together as the events were set up for the same day this […] 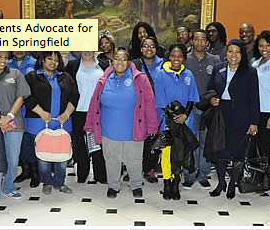