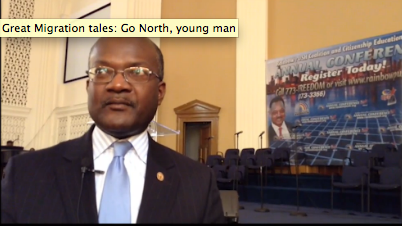 This is not unexpected of a man who has been a teacher, historian and a civil rights activist. But the variety of books he owns are just a modest reflection of a long life lived representing bits and pieces of a continuing legacy.

For example, the 95-year-old helped organize the March on Washington among many other achievements and can speak to having corresponded with Martin Luther King, Jr. and President Obama.

Born on Dec. 7, 1918 in Birmingham, Ala., Black came to Chicago when he was less than a year old, during a movement historians would later call the Great Migration. For a period many have heard of or read about — as part of the City of Chicago’s 2013 One Book, One Chicago pick, “The Warmth of Other Suns” by Isabel Wilkerson — Black can tell the tale.

Many African-Americans fleeing persecution in the Jim Crow South between 1915 and 1975 came north to cities like Chicago hoping for a better life for themselves and to find better jobs. Wilkerson’s tome presents moving oral histories of three people, who were a product of the Great Migration.

People fled for many reasons, but three of the main ones were: to flee violence, vote without restrictions and provide their children with a better education, Black said.

After leaving the South, black immigrants also faced inequality and segregation in the North. In Chicago, they were confined to the “Black Belt,” a stretch of area from 26th to 47th streets between Cottage Grove Avenue and State Street.

The mass influx of African-Americans created a “city within a city,” said Henry Binford, an urban historian at Northwestern University.

Chicago, which is still one of “ ‘the most racially segregated,’” according to the handbook, was still as segregated in 2010, according to the U.S. Census. Ninety to 95 percent of the black population in Chicago still lived on the South, West or the near North sides.

“The fact that you have neighborhoods that are predominantly African-American and Latino does not mean they don’t have the opportunity to live anywhere else,” countered Carol Adams, the director of the DuSable Museum of African American History.

But this was not always the case. Many blacks faced a violent backlash if they tried to move out of the Black Belt during the time of the Great Migration.

“Restrictive covenants meant that land owners and landlords had an agreement that they would not rent or sell to Negros,” Black said.

According to Black, as soon as the Supreme Court ruled restrictive covenants non-enforceable, the first wave of immigrants who came between 1915 and 1945 were now able to move out of the ghetto that confined them.

The prominent lawyers, businessmen and entrepreneurs moved out, leaving behind the second wave immigrants disenfranchised. As a result, these new immigrants didn’t have the support system of those before them to guide them since businesses and opportunities moved with them out of the area, Black said.

“The opportunities for young people growing up in the so-called ghetto have been more limited than in the past,” Binford said.

The first wave of more settled black migrants rejected the new comers, creating a “class bias” between the two groups, he said. The newer immigrants were seen as less sophisticated by those who made it North before them, something that happens across all immigrant communities.

“It is important to keep in mind the structural changes in the economy that take away the jobs and opportunities,” Binford said. We can’t attribute crime in African-American neighborhoods to race or a “cultural defect when in fact there is not much for the young man to do,” he said.

So, what might a young man turn to?  The “lucrative business” of drugs, Binford said.

“While on the streets, their safety is jeopardized because the less fortunate who don’t have the skills — political, economic — they have to eat, and they don’t believe they’re going to live more than 19 or 20 years old,” Black said.

In many neighborhoods on the South Side, a lack of accessible transportation is a clear example of how potential for success and growth is severely limited.

“People don’t have good and cheap transportation,” Binford said. “It is a factor in the inability for people to find jobs.”

According to State Rep. Al Riley (D-38th), who proposed a bill that would require mass transit providers like the CTA to stream their meetings online to the public so they are more accessible, the CTA’s Red Line extension plan past 95th Street has been in the books “for about 40 years.”

“As it turns out, there were no monies allocated in the 2014 CTA budget for the Red Line extension, though the CTA had gone out in the community, they had done visioning meetings with people in the community, leading them to believe that this was something that was in the works,” Riley said. “It’s not.”

As for Charlene Baiti, 70, moving to Chicago in 1974 from Jackson, Tenn., gave her better job opportunities.

“I got better paying in the North than I would have gotten in the South,” said the Hyde Park resident, a retired CTA worker.

No reforms? What about those bill signings?