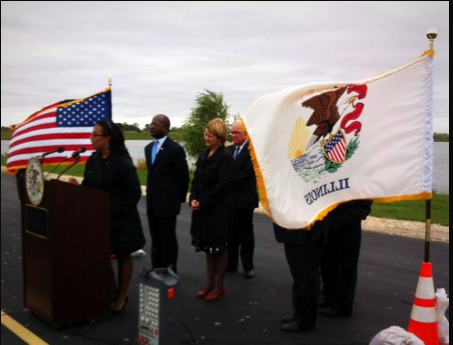 Illinois Transportation Secretary Ann L. Schneider was joined by Sen. Toi Hutchinson (D-Chicago Heights, pictured at podium in photo), Sen. Pat McGuire (D-Crest Hill), Rep. Al Riley (D-Hazel Crest), Will County Executive Larry Walsh Sr., and other officials in Wilmington today near the site of the proposed Illiana Corridor to discuss the importance of this public-private partnership project to the Will County and south suburban region. The project will be the subject of a crucial October 17 vote by the region’s Metropolitan Planning Organization’s Policy Committee, whose members will decide if it should be included in the organization’s long-range transportation plan and therefore make it eligible for federal funding.

“The Illiana is among the top three projects in the GO TO 2040 regional transportation plan in terms of job creation, congestion relief and economic output,” said Secretary Schneider. “Will County is a regional, national, and internationally significant inland port that continues to grow. This region’s prosperity was built upon the movement of freight, and the Illiana is precisely the type of strategic transportation investment that we need to make here.”

The Illiana project will have huge economic and transportation benefits for Chicago Southland. It is strongly supported by more than 40 communities, Will County, the governors of Illinois and Indiana, business owners, labor organizations and thousands of other stakeholders across two states. The Illiana will create better ways to distribute the region’s goods; welcome new investment from businesses that depend on good transportation; and make it easier, safer, and more energy-and-time-efficient to travel throughout Illinois and Indiana. In addition, it will create both short and long-term employment for thousands, all with low risk for taxpayers.

The comprehensive studies about Illiana that have been done by the Illinois and Indiana Departments of Transportation and their international consultant teams, and reviewed by the U.S. Transportation Department, offer the best analysis of the project. The Chicago Metropolitan Agency for Planning staff have offered a simplistic and misleading analysis, and based on this have indicated their opposition to the Illiana.

The Illiana Expressway will be a 47-mile access controlled highway that extends from I-55 in Illinois on the west to I-65 in Indiana on the east. The preferred corridor is located in Will County in Illinois and Lake County in Indiana. When built, the Illiana Corridor Project will provide $1 million in daily congestion relief and reduce the strain of truck traffic on local roads, thereby improving safety, travel times and job accessibility. Potential economic benefits include the creation of long term jobs that equate to $1.3 billion in wages.