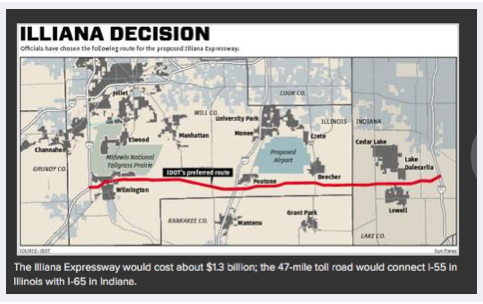 The Illiana Expressway took a big step forward Thursday when a regional planning committee voted to include it in the Chicago area’s long-range comprehensive plan, which qualifies the project for federal funds.

The Metropolitan Planning Organization Policy Committee voted 11-8 to place the 47-mile tollway in the Go to 2040 program, which outlines roughly $360 billion in land-use and transportation spending between now and 2040. Only $10 billion of that program’s funding is reserved for new projects such as the Illiana Expressway.

“It’s huge, it’s huge,” Will County Executive Larry Walsh, a member of the committee and a strong supporter of the highway, said of the vote.

The policy committee includes chiefs of the mass transit agencies and county board chairmen in northeast Illinois.

The Illiana Expressway, which would link Interstate 55 near Wilmington to I-65 near Lowell, Ind., would cost an estimated $1.3 billion. The plan is to establish a public-private partnership to build and operate the tollway, with toll revenue paying off the debt.

The project is set to go out to bid in early November, according to Illinois Transportation Secretary Anne Schneider, who chairs the policy committee. The state is looking for proposals from investment firms that are partnered with engineering and contracting companies.

Schneider said the Federal Highway Administration also needs to approve environmental studies before construction begins on the highway, which she hopes will happen by the end of 2014 or early 2015.

Transportation analysts have clashed over the need for the Illiana Expressway. The board of the Chicago Metropolitan Agency for Planning, which is heavily influenced by Cook County and Chicago interests, voted against it last week. It contended that the tollway would cost more than the projected $1.3 billion; its benefits for economic development and traffic relief would be negligible, and that toll income would be unlikely to cover its operating and maintenance costs.

“The fact of the matter is this is major financial risk to the state,” Elliott Hartstein, a CMAP board member and mayor of north suburban Buffalo Grove, said Thursday. “The Illiana does not give the bang for the buck.”

But Schneider and others have emphasized that the proposed partnership, the first of its kind in Illinois, means that there would be little risk financially for the states. If private investors don’t see the proposed tollway as financially feasible, it will not be built, they have said.

Palos Hills Mayor Gerald Bennett, chairman of the CMAP board, issued a statement after Thursday’s meeting, acknowledging the political and regional divisions over the project and calling for those to be put aside.

‘We must work to renew the spirit of regional cooperation that led to the development, adoption, and implementation of Go to 2040,” Bennett said.

Supporters of the tollway — including many municipal and union leaders and state and federal legislators from South Cook and Will counties — say it would provide another major east-west highway through northeastern Illinois and relieve traffic on I-80. That relief is needed because truck traffic is fast increasing in light of the growth of intermodal centers, where train and truck cargo are exchanged, in Will County.

The state transportation departments in Illinois and Indiana have planned the project and each state’s governor strongly backs the tollway, seeing it as fostering economic development and creating thousands of jobs.

Walsh called the Illiana Expressway a “roadway that is needed for the future. I think this is a real shot in the arm for what is going to be the second-most populated county in the state of Illinois and for the future and safety of our residents in Will County.”

Kelly addressed head-on the political controversy surrounding the bistate tollway, saying she felt the opposition was based on a “long-standing bias against the Southland.

“The Southland is just as worthy of development, just as deserving of improved infrastructure, as any other area in the region,” she said.

Not all local officials were on board with plan though. In a fiery speech, Will Township Supervisor Brian Cann said the Illiana Expressway would “slash through and destroy generations of farm country.

“Who cares about farming anyway?” Cann asked saracastically. “Obviously not the big corporations, unions and politicians who are beholden to these unions. They are willing to destroy a successful, incumbent farming industry with a road that promises much of nothing.”

Several environmental groups also opposed the project, as did a few residents who live along or within the planned route of the tollway. Peotone dairy and grain farmer Virginia Hamann likened the expressway to Chernobyl and the Berlin Wall, saying it would ruin fertile farmland forever.