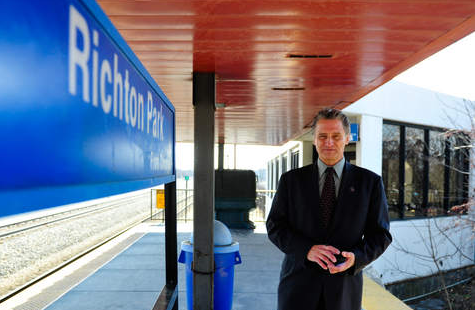 Metra officials have made several repairs to a Richton Park commuter train station where water leaked through a roof onto commuters’ heads, according to a spokeswoman for the transit agency.

One other repair to the roof may be done this weekend, weather permitting, she said.

“Rep. Riley came out here and did a personal inspection of the station after your column,” Reinbold said. “Metra engineers were out here Friday and looked at the problems, and I got a call from the head engineer who said the repairs were going to happen.

“I’m just very pleased that your column resulted in a swift response from Metra.”

But the Metra spokeswoman, Meg Reile, said the repairs were scheduled before my column appeared last week and were delayed due to weather conditions.

She said it was too hazardous to send crews out to work on the station roof as long as ice and snow were present and, in addition, the patching substance can’t work in cold temperatures.

“Several repairs have been made to the roof already, and there is one more spot we’re hoping to get to, perhaps this weekend, depending on the weather,” she said.

I still believe Riley, who just happens to be chairman of the Illinois House mass transit committee, deserves much of the credit because he immediately sent an email to new Metra executive director Donald Orseno referring to my column and urging him to address the issues raised.

In that column, Reinbold explained that commuters sometimes had to open their umbrellas inside the station because melting snow or rain would leak through the ceiling.

In February, the mayor said, so much water was “pouring through the ceiling” that buckets were placed on the floor, “but they were overflowing,” creating an inch or two of standing water inside the station.

He said the problems had gone unaddressed for two years despite his repeated complaints.

During a tour of the train station with me, Reinbold pointed out previous patch jobs to the ceiling that had deteriorated to the point that they presented a potential hazard to commuters walking underneath them.

“It was a shoddy repair job to begin with,” the mayor said, “but you can see where the water leaked through the patches and mold was formed, which is an unhealthy condition for the passengers.”

In addition, graffiti was present in the station on an advertising sign and etched into Plexiglas windows at a warming house where commuters wait for the train.

Reinbold said that a local ordinance would require any other business to remove the graffiti in 48 to 72 hours, but local ordinances cannot be enforced on railroad property.

The train station graffiti, the mayor said, had been evident for months.

The Metra spokeswoman said the graffiti on the advertising sign is the responsibility of the company that leases the space.

She said Metra had notified the company about the graffiti problem shortly before I wrote the column and it had been cleaned up but appeared again shortly afterward.

She said the graffiti is a recurring problem at the Richton Park station and others and Metra tries to control the problem, but “soon after it is removed it often reappears again very quickly.”

The Metra spokeswoman said that in addition to repairing the roof leaks, the agency will replace ceiling tiles damaged by the leaks.

She emphasized that the leaks were not caused by rain but by melting snow and ice over the winter months.

Reinbold also had complained about dirt and slime that had built up on the station floor near vending machines inside the train station.

“That is the responsibility of Richton Park, and we have talked to the mayor about that,” she said.

“It always has been their responsibility.”

Reinbold said, “that’s correct” about the station floor being the responsibility of the village.

“We will take care of that,” the mayor added. “But no one from Metra has called me about that.”

As for Metra planning to repair the station before my column, the mayor said: “I’m sure that’s true. But they have said they have been planning to make the repairs for two years. And they never did.”

In an email, Riley stated that he had asked Orseno to speak to the South Suburban Mayors and Managers Association about preventive and deferred maintenance issues and he agreed.

As for the graffiti present in the Metra station, Reinbold said, “It’s a poor reflection on Metra, Richton Park and all the other communities on the line to just blame that on someone else.”

“You have to take responsibility for a problem like that and present the best image possible to the public,” Reinbold said.

“I would like to know how bad the problem has to get before Metra replaces the Plexiglas on the warming house.”

It was my understanding that visibility through the windows has to be near zero before that happens.

I can see both sides of the graffiti issue. It’s a problem in many communities. And it can cost a lot of tax money to constantly clean or replace property damaged by graffiti.

Nevertheless, the public perception of a community can be severely damaged by graffiti that’s allowed to remain in place.

There may be no solution, but trying to eliminate the problem as soon as it arises seems like the proper response by government agencies.

As for Metra, the important point here is that it responded to a problem that jeopardized the safety of commuters and quite simply became a public eyesore.

The mayor said that while he’s pleased the repairs are finally being made, he’ll take a wait-and-see approach.

“We’ll see what happens after the first heavy rain,” Reinbold said. “If commuters don’t have to open their umbrellas or leap over puddles inside the station, that would be a good thing.”