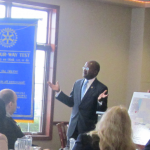 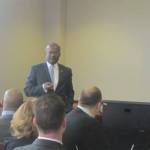 Without a moment’s hesitation, Rep. Riley explained, he’s now the Assistant Majority Leader of the State House, he had to give-up some of his committee chairmanships, including that of his beloved Cities and Villages Committee.

He was, however, able to keep his chairmanship of the powerful Mass Transit Committee.

Slipping into professorial mode, Rep. Riley gave the Rotarians and their guests a brief history of mass transit in the Chicago Metropolitan area.

In 1945 the CTA was created by the Metropolitan Transit Act. With the RTA Act of 1973, Metra was formed to consolidate com- muter rail lines. The RTA Act was further modified in 1984. “We should have World Class mass transit,” he affirmed.

“Who here has seen the CTA map?” he challenged the group. After a show of hands, he continued, “It looks like: \ | /.” [He gestured with his arms to indicate a fan pattern.] “Skokie Swift, Evanston Express, Oak Park, Forest Park,” he rattled off CTA destinations that extend beyond Chicago, “Are they in Chicago? O’Hare Field wouldn’t be in Chicago, but for the Kennedy Expressway and the concept of contiguity.

“I told Forrest Claypool, “Your map tells on you”.” continued Rep. Riley. “Coincidence that repeats itself is policy”.

“Over $40 million from the Southland goes to the RTA annually; partially for CTA services that we don’t receive. We deserve World Class mass transit” he reiterated. “I am an Urban Planner by profession and did transportation planning in the ‘70s. My job is to make the RTA and the Service Boards; CTA, Metra and Pace accountable to the riding public. Poor management, benign neglect of certain regions and a sense of insularity is not the way to administer a regional transit system. The Red Line Extension to 130th Street is a project that has been promised and we’re going to hold the CTA to their promise”.

“Any success that I have had has come because I am a good teacher, but I’m also a good listener. You have to listen.” he affirmed.

“I think like a planner and I analyze like a statistician. That is because my training and career has been in both fields. You also can’t be afraid to dispel the false beliefs that some people have either”.

To demonstrate how both roads and mass transit work together, Rep. Riley catalogued projects that have been started, completed and have been passed while he’s represented the 38th District.

These include the I-57/I-294 Interchange, which is well under- way; the Southeast Service Metra Line from the LaSalle Street Station downtown, all the way down to Balmoral in Crete, the proposed 45-mile Illiana Expressway, all but seven miles of which are in Illinois, many improvements on I-57, which he listed on his display map; and the repaving of 159th Street.

He then addressed the proposed Southland Casino project, “We’re losing $20 million a month to Indiana.”

Pointing out that, due to revenue-sharing, no matter where it’s eventually located, all Southland communities will benefit from this project.

His vision of the project is a facility with multiple uses, not just a casino, as in Indiana.

The South Suburban Casino will have hotels, retail, entertainment and other facilities, to make it truly a destination, with some- thing for everyone.

“I’m proud to represent you for as long as I have,” concluded Rep. Riley, “If the things I set out to do are completed, I can retire — my own version of term limits.”

He flashed a sly grin.