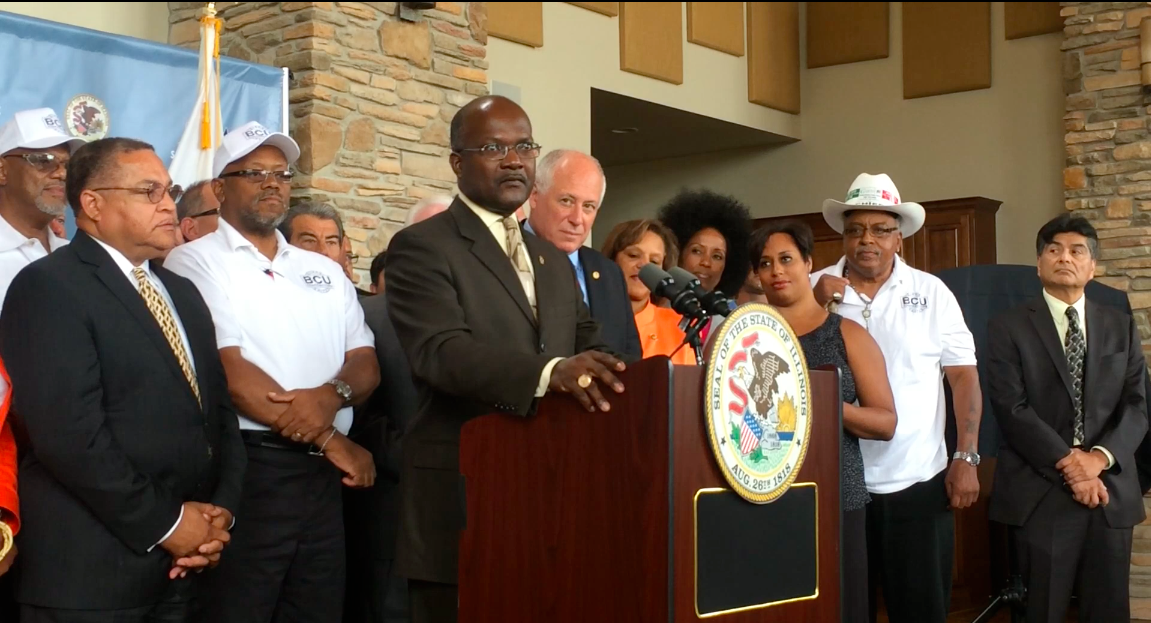 Flanked by a bevy of local leaders, Gov. Pat Quinn unveiled a sign officially renaming Bult Field as the state-owned South Suburban Airport and announced that he will meet with private investors next month to create a plan to further develop the airport.

The state bought the 288-acre airport with its 5,000-foot runway on Kedzie Avenue in Monee on June 30 for $34 million. It lies within the footprint that has been established for the future airport, bringing its total land acquisition to 3,600 acres, of the 5,800 acres needed.

Even though it has taken decades to get to this point, Quinn said, “The longest journey begins with the first step.”

The next step will be a Sept. 23 meeting in Joliet with firms interested in forming a public-private partnership to build and develop the South Suburban Airport, Quinn said.

Before any further development can begin, the Federal Aviation Administration must complete a Tier 2 environmental impact study of this project and approve the master plan for an airport.

With 1.8 million people living within 15 minutes of the site, the region — which includes the south suburbs, Will County and the Kankakee area, would make up “one of the largest cities in America,” Quinn said. “It’s important that it have a balanced transportation system.”

The airport now operates as a general aviation facility, and that will continue, but the state wants to expand on that, the governor said.

The South Suburban Airport is “all about economic opportunity” in an area that has not had enough attention, he said.

“This is very, very important to the people of this region. This will make a major economic difference for decades to come,” Quinn said.

Monee was the first of Quinn’s three scheduled stops Thursday, with the others in Danville and Mattoon, talking about creating jobs and strengthening the work force.

Local government leaders acknowledged that this was a long time coming and hailed the governor’s efforts in bringing people together to make it happen.

“I knew this would happen eventually,” Crete Mayor Mike Einhorn said after the press conference. “It’s easier to add on to an existing airport than start a new one. But as I said a million times, you have to have a private commitment. If not, you will have serious problems.”

State Rep. Al Riley, D-Olympia Fields, called the announcement a “dream come true for the region,” citing the progress of both the airport and the proposed Illiana tollway.

The proposed Illiana project marked the first time Illinois has used a public-private partnership for a major infrastructure project. Four financial teams have been identified as finalists, but the project is awaiting federal approval, which may come this winter.

The proposed 47-mile tollway would connect Interstate 55 in Wilmington to Interstate 65 in Lowell, Indiana,

Officials have said the tollway and the airport projects are “mutually beneficial” but not co-dependent.

But both are components of what Quinn called a “balanced transportation system.”

“We are determined to make this a reality,” she said. “The Southland is prime for an economic renaissance. It is poised to be a player in the global economy.”