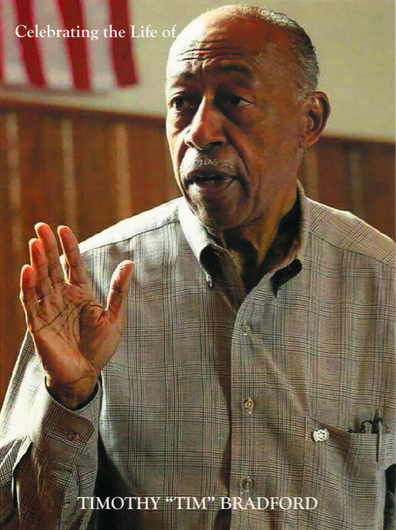 I’ve only been in this role as columnist for about two years, but in that short time Tim Bradford of Olympia Fields became a trusted source.

Bradford, 75, died Friday, the same day paperwork for the March primary was filed on his behalf for a fifth term as Rich Township Democratic Committeeman.

“We lost a great man and public servant, who was devoted to making Rich Township a better place for his constituents,” Cook County assessor and Democratic Chairman Joseph Berrios said in a statement. “Tim was an institution in Cook County and he will be missed by all.”

I met Bradford, a Chicago native, a few days before the Nov. 8, 2016 presidential election. He called at the last minute to invite me to his political fundraiser at the Matteson Holiday Inn. Speakers included U.S. Sen. Dick Durbin and then-Rep. Tammy Duckworth, who won the state’s other Senate seat a few days later.

Bradford impressed me as an old-school, get-out-the-vote operative. He won me over with charm and straight talk. He seemed like a genuinely good person.

“Some people obtain great personal sustenance from helping others before themselves,” state Rep. and Rich Township Supervisor Al Riley wrote in a tribute he shared on social media Saturday. “It’s a view into their own humanity, their very soul. Such was Tim Bradford.”

I also respected Bradford’s influence as a political power broker. He served as township committeeman since 2002 and rose through the ranks to become first vice chairman of the Cook County Democratic Party.

He served in an appointed position as Rich Township administrator and held two elected offices, as Metropolitan Water Reclamation District commissioner since 2014 and for 30 years as a commissioner and past president of the Olympia Fields Park District Board.

On June 16, the park district dedicated the Bradford Barn, a restored 1917 structure at Sgt. Means Park available to rent for receptions and other functions.

“We’re so happy we were able to do that,” said Denise Will, park district executive director. “We’re all going to miss him.”

On May 30, the Illinois General Assembly adopted a resolution sponsored by Riley that congratulated Bradford upon the dedication and recognized his longtime community service.

Bradford served in a senior management position with Quaker Oats for 25 years, the resolution said, and he later became a successful entrepreneur.

His ventures included an interest in a St. Louis-based Miller Beer distributorship and as owner of the Docks Fish food franchise, the Metropolitan Water Reclamation District said in a statement Monday.

“His success in the field of sales and marketing forged his path as a dedicated leader in the south suburban political community and the Democratic Party,” the MWRD said.

More recently, Bradford devoted his time to government and politics. He became known as “The Godfather” of south suburban politics, family members said.

“After retirement, Timothy Bradford began his next career in public service, a passion that had always been important to him,” the General Assembly resolution said.

He volunteered with numerous civic and business organizations, including the Rich Township High School District 227 advisory board, the Great Lakes Bank advisory board, and as president of the Matteson Rotary Club.

“Timothy Bradford has been a tireless leader in the Southland for almost four decades and a dedicated member of the Olympia Fields community,” the resolution said.

In his heartfelt tribute shared on Saturday, Riley wrote that Bradford was raised on Chicago’s West Side and set out “to help change the social and political landscape of the south suburbs.

Bradford showcased his political prominence in June when Rich Township hosted one of the first forums featuring Democrats running for governor.

I found Bradford to be straightforward and helpful in September 2016, when Democratic Party officials convened to choose a replacement to serve out the term of Cook County Commissioner Joan Murphy, who died while in office. Ed Moody, D-6th, of Crestwood, was chosen from among nine applicants.

I last spoke to Bradford a couple weeks ago when I sought his reaction to Moody’s decision to not seek election to the county board in 2018. He told me he enjoyed talking politics with me, but never mentioned his health.

“He had had some medical issues over the past year,” Riley told me.

By law, Gov. Bruce Rauner will appoint someone to serve out the remainder of Bradford’s MWRD term, which ends in 2020.

Bradford won re-election in April to another six-year term on the Olympia Fields Park District board. The board will likely choose a replacement and appoint someone to serve until the next consolidated election in spring 2019, Will told me.

It’s unclear whether Bradford’s name will appear on ballots March 20 for the township committeeman position. A representative for Cook County Clerk David Orr did not immediately respond to my requests for comment.

“Tim Bradford my friend, my bulldog. You will be missed,” U.S. Rep Robin Kelly, D-Matteson, said on Twitter.

Bradford and his wife of more than 50 years, Mary Ann, raised four children and were grandparents of eight, the MWRD said in its statement.

“Tim was a dedicated public servant and advocate for the environment,” MWRD President Mariyana Spyropoulos said in the statement. “He was a mentor to some and friend to many. He touched countless lives, and he will not be forgotten.”

Bradford graduated from Crane High School in Chicago, said his daughter, Cherise Montgomery. He was an athlete in high school and later coached youth basketball for many years, she said.

Visitation for Bradford will be from 6 to 9 p.m. Friday at Leak & Sons Funeral Homes, 18400 S. Pulaski Road, Country Club Hills. A wake will be held 9:30 a.m. Saturday at New Faith Baptist Church International, 25 Central Ave., Matteson, followed by a funeral service at 10:30 a.m.