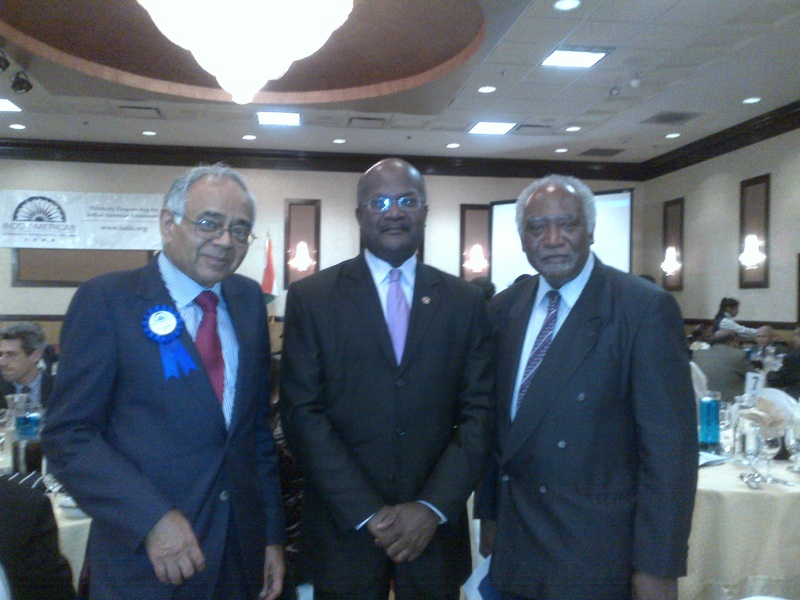 CHICAGO (IL) — The state’s top Democrats were out in full force at the Indo-American Democratic Organization’s (IADO) 35th annual banquet and fund-raiser held on September 21, at the Holiday Inn, Skokie.

Indian Consul General Dr. Ausaf Sayeed joined the distinguished list of dignitaries. The overwhelming support given to the Indian American community signifies the important role the IADO plays in the political process of this country. Every elected official praised the efforts of IADO for empowering the Indian community and being a voice for their concerns.

IADO President Ashish Sen warned of the dangers posed by the Republicans, whose core aim is to make the very rich richer by cutting their taxes, denying climate change, and opposing social programs the minimum wage.

He cited both a NASA study that concluded that great empires end when wealth is concentrated in a few hand and Nobel Laureate Paul Krugman who said there is no evidence that cutting taxes enhances development.

Sen noted that Governor Quinn has focused on nurturing growth by investing in infrastructure and education. Under his leadership Illinois’ unemployment rate has dropped rapidly while the tax burden has remained moderate.

Governor Pat Quinn commended IADO for empowering immigrants since 1980 and working towards causes that are important to our State. He affirmed his support for raising minimum wages.

“No one who works a 40-hour-work week should live in poverty, said the Governor. He noted that when President Roosevelt signed the first minimum wage law, it was just 25 cents an hour—and even it was then opposed by Republicans.

Governor Quinn reminded everyone that the Voter Registration Day was on October 23 and citizens should participate in the election process.

There are options to vote by mail or vote early if you can’t vote on Novemver 4. Voters can request an absentee ballot through the mail or in person.

He reiterated his support for fair taxes, funding for education, economic growth and job creation, raising the minimum wage and health care for all. His message was filled with honesty and compassion for working families of Illinois.

“Do something heroic, vote “yes” on November 4 to raise the minimum in Illinois, ” he urged the people gathered. He acknowledged the presence of the Indian Consul General Dr. Ausaf Sayeed, who represents India, the world’s largest democratic nation.

Alderman Ameya Pawar presented the IADO Honorary Board Member 2014 Award to Illinois Senate President, John Cullerton, who congratulated Alderman Pawar for the excellent job he has been doing in the 47th ward of Chicago.

Cook County Board President Toni Preckwinkle introduced US Senator Dick Durbin, who is the leading sponsor of the Dream Act. He began by saying that he owes his success to his mentor and friend late Senator Paul Simon who taught him to help the helpless and be honest.

In Illinois, he said, about 5.1 million people vote in a presidential election year, but only about 3.6 million do so in an off-year Congressional election, such as this year. Of the 1.5 million who drop out of the off-year election, Durbin said, about 1.2 million are Democrats — generally young voters, Hispanics, African-Americans and women.

He stressed the need for all registered voters to go to the polls and bring victory to the Democrats.

Congresswoman Jan Schakowsky talked about the Congressional Caucus on India to which she belongs. Its mission is to advocate the concerns and needs of the Indian-American community and to promote better Indo-US ties.

This caucus has implemented an initiative to track hate crimes against Sikhs, Hindus and Arab Americans and has been instrumental in organizing the first Congressional Diwali celebration at Capitol Hill.

Other speakers emphasized the need for electing Democratic Candidates on Nov 4th to ensure the well being of the state and its citizens.

Dr. Ausaf Sayeed was delighted to announce the arrival of Prime Minister Modi in the US later this month which will lead to greater understanding between the two great nations. He congratulated the IADO for its great work in the Indian community.

Lastly, IADO joint secretary Shajan Kuriakose addressed the gathering as he is running for Alderman in the 50th Ward of Chicago, which is home to several hundred Indians. He urged voters to actively participate and make a difference in the community.

Vote of Thanks was proposed by Gladson Varghese who thanked all the elected officials for coming and gracing the event and supporting the mission of IADO. He thanked the IADO Board of Directors for working tirelessly to make this event successful.

Village of Richton Park “I Make A Difference Award”